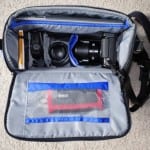 Mirrorless Mover 30i with a Fujifilm X-E1 and two lenses

I’ve been carrying the largest bag in the line, the Mirrorless Mover 30i, for a couple of weeks now. The MM 30i has an iPad pocket in the main compartment and a zippered pocket along the front of the bag. There is a messenger-style flap that basically covers the zipper on the small front pocket. The main zipper opens opposite the flap, so the flap doesn’t really affect the main camera compartment at all.

There is the usual Think Tank pocket on each end of the bag and a channel on the back of the bag so you can wear it on a belt. I haven’t tried the MM 30i with my Think Tank Speed Belt, but it would make a pretty big fanny pack! Along with one or two other belt cases you could probably wear your entire mirrorless kit on your belt. Personally I would have preferred a strap to attach the bag to the handle of a rolling suitcase. Other Think Tank standard features include a nice removable shoulder strap and a rain cover.

I’ve been using the MM 30i with my Fujifilm X-E1 kit. The main compartment easily holds the camera with one lens attached, an additional lens (there is plenty of room for pretty much any mirrorless-sized lens), a Manfrotto ML360h LED, a moleskin notebook and an iPad. I could fit another lens as well, but I only have two for the Fuji :-). 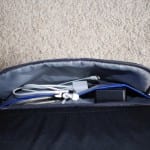 Rather small front pocket, but it works for the essentials

The front pocket has two small pockets inside. The pocket is not very deep, but there is room for a camera battery charger, an extra battery and the iPad cord. That’s about it. I’m glad the bag is small, but I would have liked an expanding pocket (maybe elastic?) to make the pocket just a bit more useful.

The MM 30i is what I would call a good “city bag”. It works great for shooting with a small mirrorless kit. Around town or back and forth to the office it’s just about the perfect size. There is not much room for extras, but it’s really not that kind of bag.

If you need to take a weeks worth of gear along I would recommend something like one of Think Tank’s backpacks or (what I use) a Think Tank Photo Retrospective 7.

Thanks to Think Tank Photo for bringing their expertise to a line of camera bags for our small cameras. I would love to see a nature/outdoors camera backpack that is scaled for a mirrorless system. Maybe something in the Midshift Gear line? I’d be glad to field test a prototype for you guys 😉