It may not be obvious when you look through my travel and nature images, but I absolutely LOVE flash photography. Whether you’re shooting portraits, weddings, macro, or wildlife with a […]

It may not be obvious when you look through my travel and nature images, but I absolutely LOVE flash photography. Whether you’re shooting portraits, weddings, macro, or wildlife with a flash extender… When you understand how to use flash, you can create beautiful light practically anywhere!

Once you understand how flash works, the next step is to get the flash off of your camera. In order to do that you need some way to trigger the flash when your camera fires. From now on I’ll refer to the on-camera trigger as the commander, and I’ll refer to the off-camera flash as the remote. Professional photographers have long preferred radio communication between the commander and the remotes to IR systems.

IR transmitters have long been used to trigger a remote flash using the camera’s built-in flash or a camera mounted flash as the commander. Nikon’s CLS system and Olympus’s RC system are two examples. This setup is generally reliable in a confined space (like a studio) with a clear path between the commander and the remotes, but when you add variables like bigger soft boxes and direct sunlight the IR system shows its’ limitations pretty quickly.

Radio signals travel long distances and don’t require a line of sight between the transmitter on the camera and the remote flash. Recently radio triggers have added features that were previously unavailable in radio systems. Communication between the camera and the remotes via radio signal has become more widely available. This allows for TTL flash metering and other advanced functions. That brings us to the Olympus fl-700wr…

A state of the art system.

The Olympus fl-700wr embodies all of the features I’ve always liked about the Olympus flash system, while adding new up to date functions. First of all it’s small yet powerful. The fl-700wr is small enough to fit easily into a camera bag, and it balances nicely on the OM-D bodies. It has a guide number of 42 and a built in LED video light, AND it is splash proof like the Olympus OM-D bodies.

The fl-700wr works with the Olympus RC system, but the fl-700wr adds RADIO communication. I was so excited when I learned about this feature! The fl-700wr can act as a commander or a receiver for full TTL control of unlimited remote flash units. To us it as a commander you need to put the fl-700wr in the hotshot of your camera and use another fl-700wr as a remote. Olympus also offers the FC-WR wireless commander that attaches to the camera’s hot shoe and drives an unlimited number of remote flashes in 3 groups. You can also use the Olympus FC-WR receiver to covert non-radio units like the Olympus fl-900r into radio controlled remotes that you can control with the fl-700wr or the FC-WR.

The setting and operation of the fl-700wr s generally similar to other Olympus flash models with the additional button for wireless radio control. There are direct buttons to change the mode, zoom, and exposure compensation, and a menu button to get into more advanced settings. Press and hold the right side of the multi selector, marked LED, to turn on the LED video light.

You can use RC mode to control a remote Olympus flash using the fl-700wr or any other Olympus flash via an IR signal. To use the RC system you must go into the camera’s menu and turn RC mode ON, and set the remote flash’s mode to RC. As I mentioned earlier, this system works fairly well, but it is limited to line of sight operation and is not reliable in direct sunlight.

The radio settings are actually much less complicated to set up. You do NOT have to turn on RC mode in the camera or the remote flash. The radio transmitter works with RC mode on or off in the camera, and we will use a different setting for the remote.

Using the fl-700wr as a commander.

On your remote fl-700wr, press the radio control mode button and select either RCV or X-RCV. In RCV mode the remote’s mode and power settings will be controlled by your commander on the camera. In X-RCV mode the remote will be set using the controls on the remote flash. 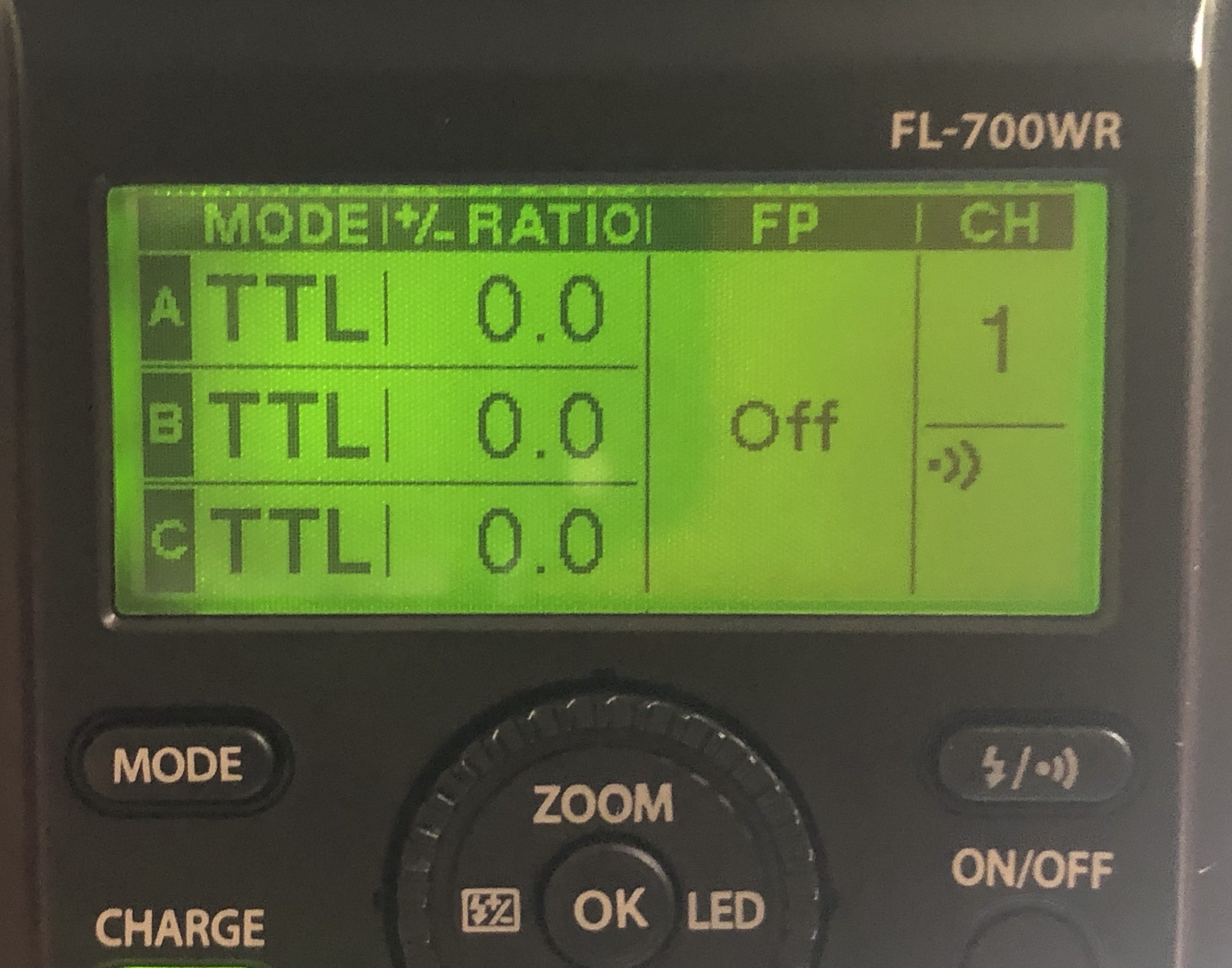 Using the FC-WR as a commander.

To use the FC-WR, simply attach the FC-WR to the camera’s hot shoe and turn it on. Use the settings described above to set up the remote flash.

The FC-WR has direct A, B, and C buttons to adjust each group of remotes. Use the mode and +/- buttons along with the dial to change settings. Press the right side of the multi selector (marked Ch) to change the channel, and use the multi selector to highlight the FP mode to turn it off or on.

I always liked the Olympus RC mode, but the radio wireless functions really take the system to the next level. RC mode offers you 4 channels and a 16.4′ range in ideal conditions, while the Olympus radio system gives you 15 channels and up to 98.4′, and you don’t have to worry about line of sight. This makes it a much more reliable and versatile system, AND its even easier to use than the RC system.