I took a dream trip down the “mother road” in February 2012. My camera club buddies and I spent five days exploring the old Route 66 between Albuquerque, NM and […] 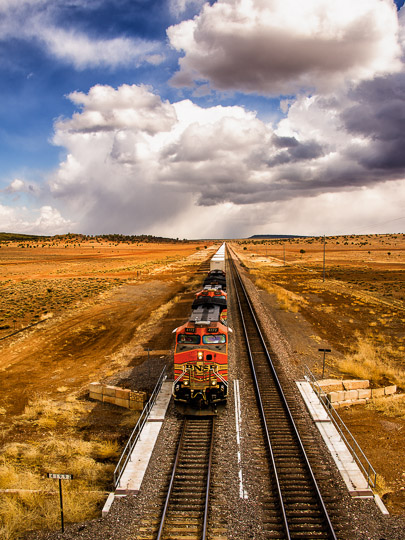 I took a dream trip down the “mother road” in February 2012. My camera club buddies and I spent five days exploring the old Route 66 between Albuquerque, NM and Oatman, AZ. We saw a little bit of everything, and I think all of us would like to trace the same route with a month to spare instead of a week.

This frame is one of those “everything came together” shots for me. We had stopped to photograph an old Route 66 bridge that sat along side the current bridge somewhere in Arizona. It was sunny and cool where we were, but the storm in the distance is actually a snow storm. We were shooting the old bridge and the “Route 66” emblems painted on it.

We were just thinking about packing up when we saw the train coming. I picked my spot and composed the shot I had in mind. Our shutters clicked like crazy as the train went by. It was one of those times when you’re sure you’ll get something good if you just don’t screw it up. I would have shot the train if the engine had not been orange, but the bright color really helps the locomotive jump out of the landscape.

The clouds rolled in shortly after this shot, and it started to snow. Another train came by before we left, but the light was just not happening. Right place, right time…

What a great trip!